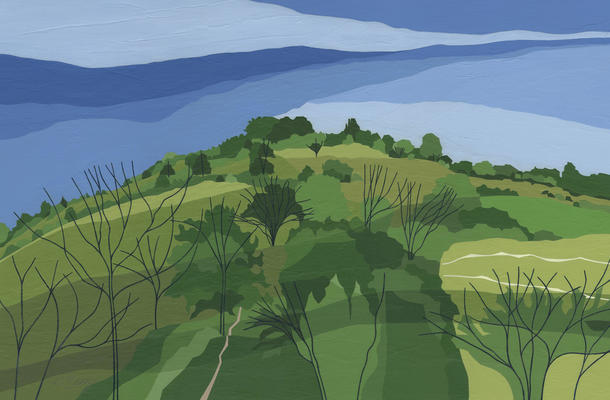 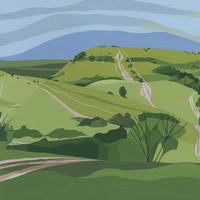 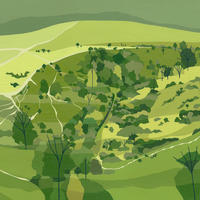 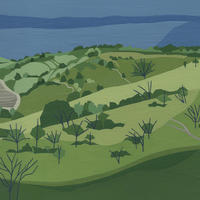 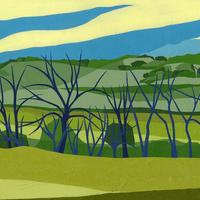 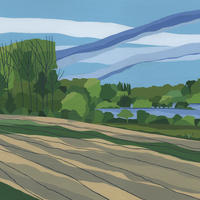 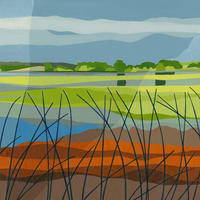 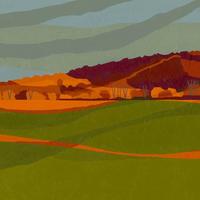 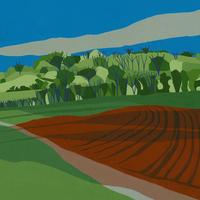 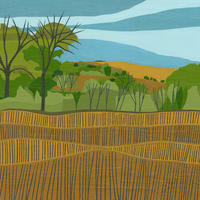 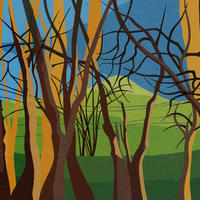 Christine paints contemporary landscapes, characterised by deliberate lines and shapes, flattened planes and the use of saturated colour. She grew up in Trinidad and the bright light and vivid colours of the tropics still exert an influence in her paintings.

Most of Christine's paintings are inspired by the landscapes of the Ridgeway and the Chilterns in Hertfordshire, Buckinghamshire and Oxfordshire. She is especially interested in landscapes where the natural lie of the land is accentuated by man-made interventions such as tracks, farmed fields and hedgerows, planted woodland and reservoirs.

Other parts of England feature in her paintings too: the South Coast, Devon and Cornwall, along with Somerset, Lincolnshire, Shropshire and the Lake District.

Another aspect of her work is her still life paintings which often include flowers for their exuberant colours and organic shapes.

Her paintings consist of several layers of acrylic paint on a collaged base. She begins by drawing the composition onto board before collaging the whole surface with tissue paper. The drawn composition is important to her; when it begins to disappear beneath the layers of tissue, she re-draws it. She then paints in acrylics onto the collage base, focusing on the original drawing but also incorporating many of the shapes which originate from the tissue layer. Her aim is a synthesis between the drawing and the more abstract collage, with the painted layer bringing the two together.

Her background is in illustration and design (First Class BA Honours Degree, Manchester, 1982). Most of her illustrations feature in publications for environment and development organisations (such as IUCN in Geneva and IIED in London). During this period, she produced black and white, pen and ink drawings.

In 1998, she won the Sunday Times/British Airways Competition to design a tailfin for BA as part of its ‘Global Images’ campaign. Her artwork, inspired by British canal art and titled ‘Grand Union’, decorated BA tailfins and buses for several years.

In the autumn of 2019, Christine won Second Prize in ‘The People’s Landscape’, an exhibition of landscape paintings organised by The Courtyard Art Studio and hosted by Claydon House, National Trust. The prize was awarded for her painting 'Pulpit Wood'.

In April this year, Christine was awarded the Swire Ridgeway Arts Prize in the Wall Art category. Her painting 'Ivinghoe Beacon from Steps Hill' was also judged the overall winner.

Christine is a member of the Bucks Art Society and the Visual Images Group. 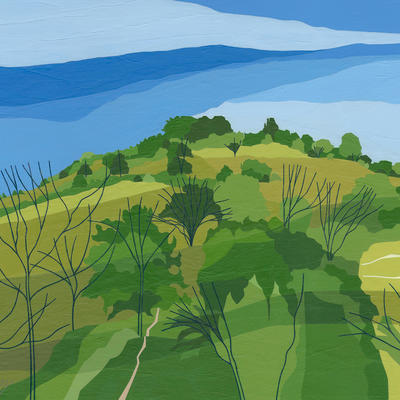